What an amazing experience I had this year raising heritage turkeys! In the past, I had only raised the broad breasted turkeys.  After doing a bit of research about the heritage breeds I was intrigued. Everything that I read boasted about the amazing taste of the heritage turkey breeds and their great foraging abilities. So naturally, I needed to give them a try.  Due to the minimum order requirement of 20 for heritage turkey breeds and not wanting quite so many turkeys I split an order with a fellow Meyer Hatchery Remote team member, Sarah. For my portion of the order, I received six Bourbon Red, three Black Spanish, and three Midget White. Sarah’s order included three Chocolate, three Royal Palm, three Blue Slate, and three Narragansett. 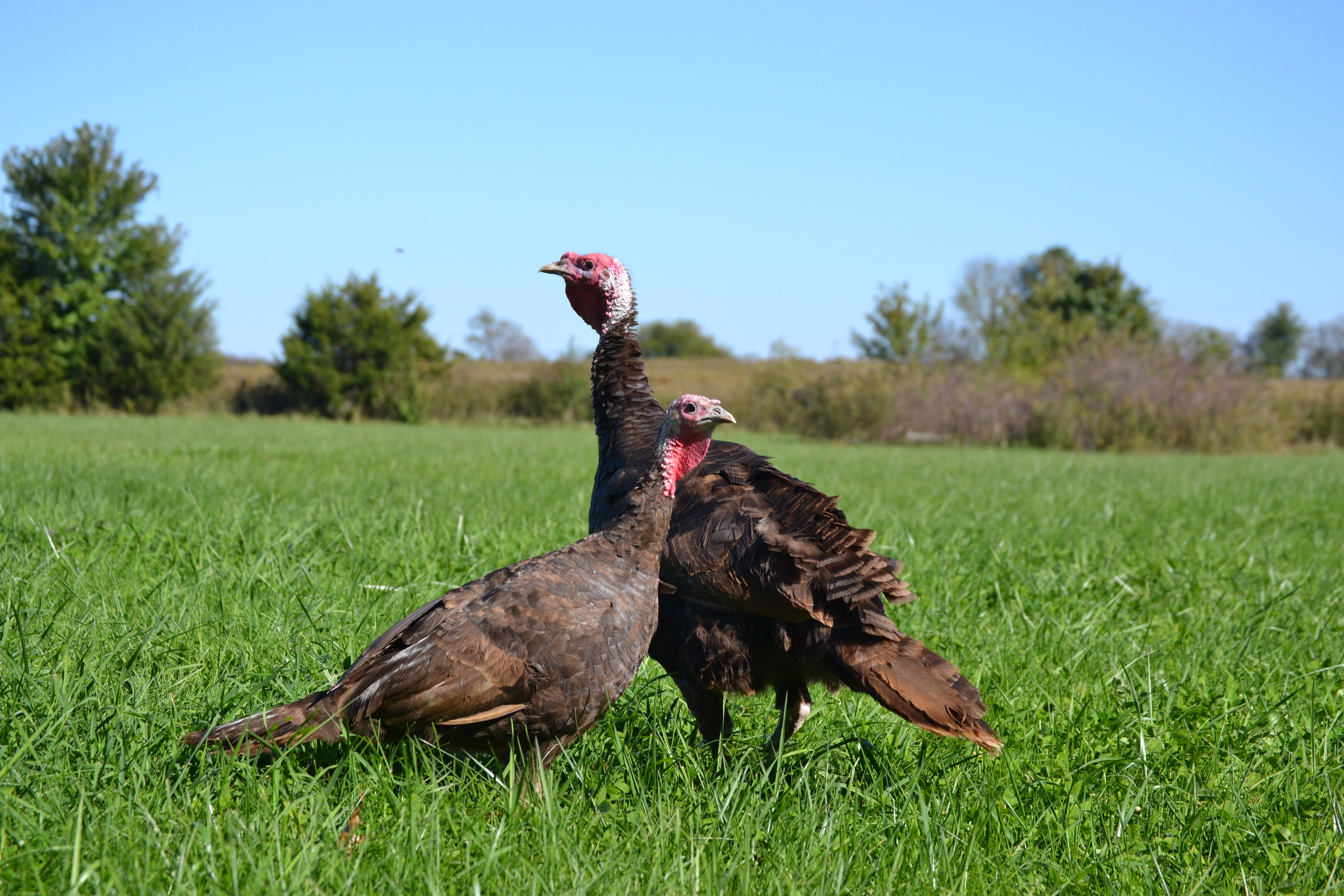 Prior to my poults arriving I set up my brooder space to ensure they had a safe and warm environment to come home to.  You will want to be sure that your brooder is draft free and a stable 95 degrees for the first week and then you can decrease the temperature by five degrees each week until they are fully feathered and ready to move outdoors. A thinly rimmed waterer is suggested so that your poults are not able to get into the water, as they will likely try and do. I personally place small rocks around the inside lip of the waterer to keep the poults from diving in and have had no issues.

Once our poults arrived I introduced each one to the brooder by dipping their beaks in their water and food to show them where they were.  Turkey poults are not the smartest at first, sometimes it takes introducing them to their food and water a few times for them to get it down. I then check on them often for the first few hours making sure that the brooder temperature is just right. 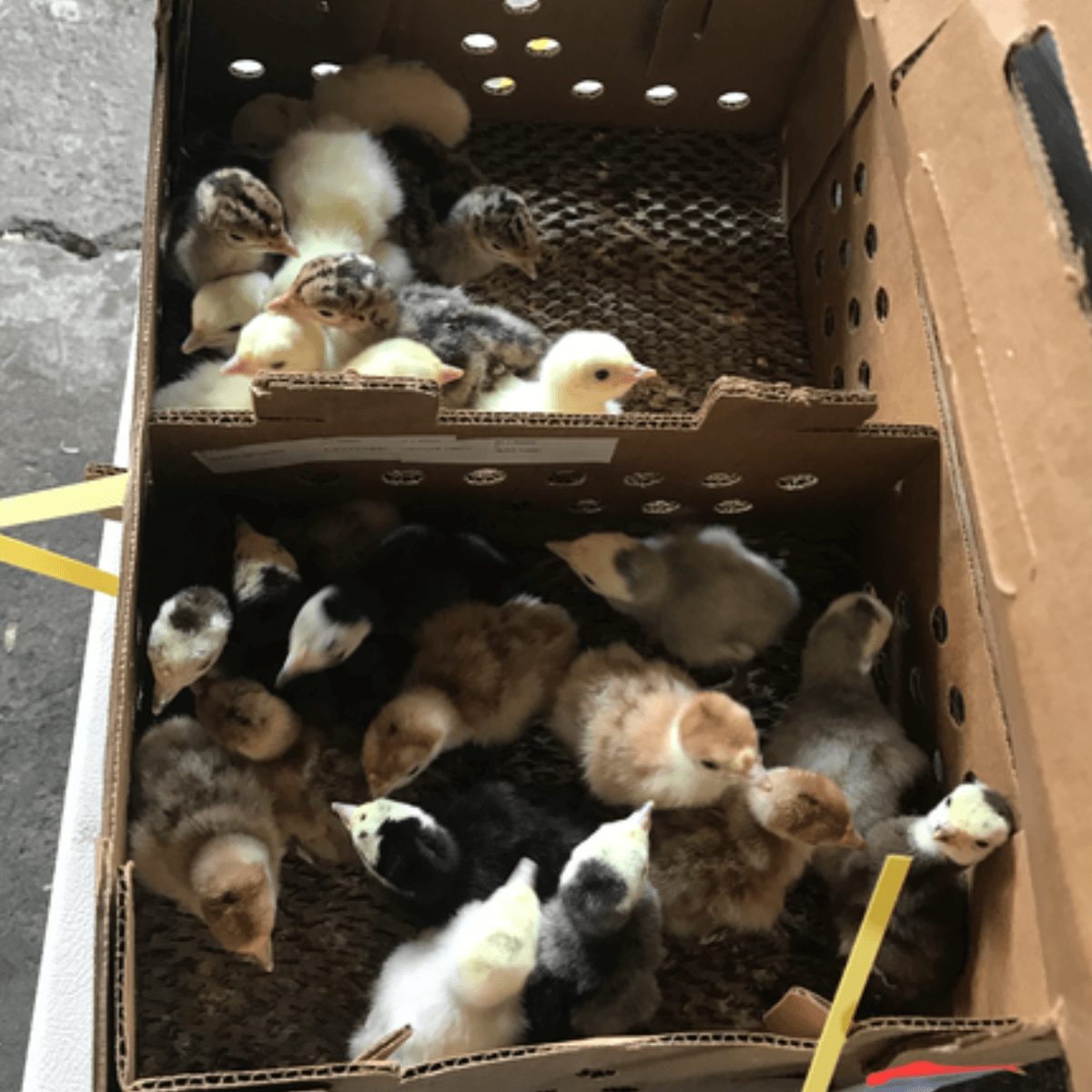 Weeks 1-6: I started my poults of with Meyer Hatchery 27% protein medicated turkey starter Turkey Starter Feed. I personally choose medicated started and have found that I have much fewer issues with coccidiosis, but this is optional. Make sure that feed is available at all times.  Unlike the Broad Breasted variety turkeys, the heritage will not overeat. Sarah prefers to use non GMO or organic feeds, so she used the 27% organic non medicated game bird starter. Just in case coccidiosis became an issue she has corid on hand to treat in their water. 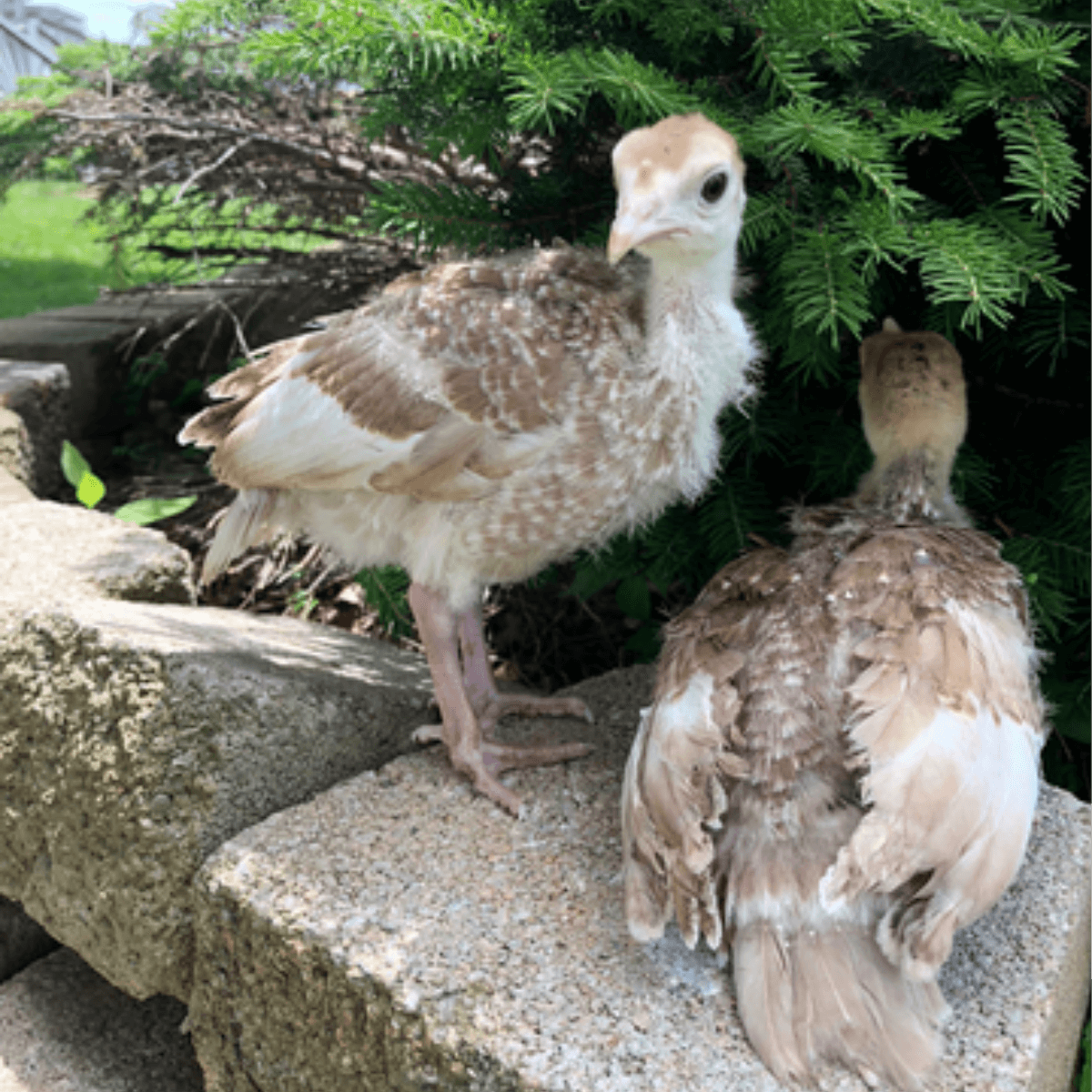 20% Turkey grower feed is what is recommended but I had attended a poultry workshop at OSU where a professor and longtime turkey raiser suggested keeping you poults on a starter feed a bit longer in order to allow the breast to develop bigger and better. So I chose to switch over to a 20% feed at around 12 weeks of age.

17% Finisher or maintenance feed is recommended at this age.  Since I processed our turkeys at 24 weeks we chose to leave them on the turkey grower until processing day.  If you choose to keep a breeding pair or to raise your heritage turkeys as pets this would be a great time to lower the protein in their feed to maintain a good weight and give them the nutrition they are in need of. 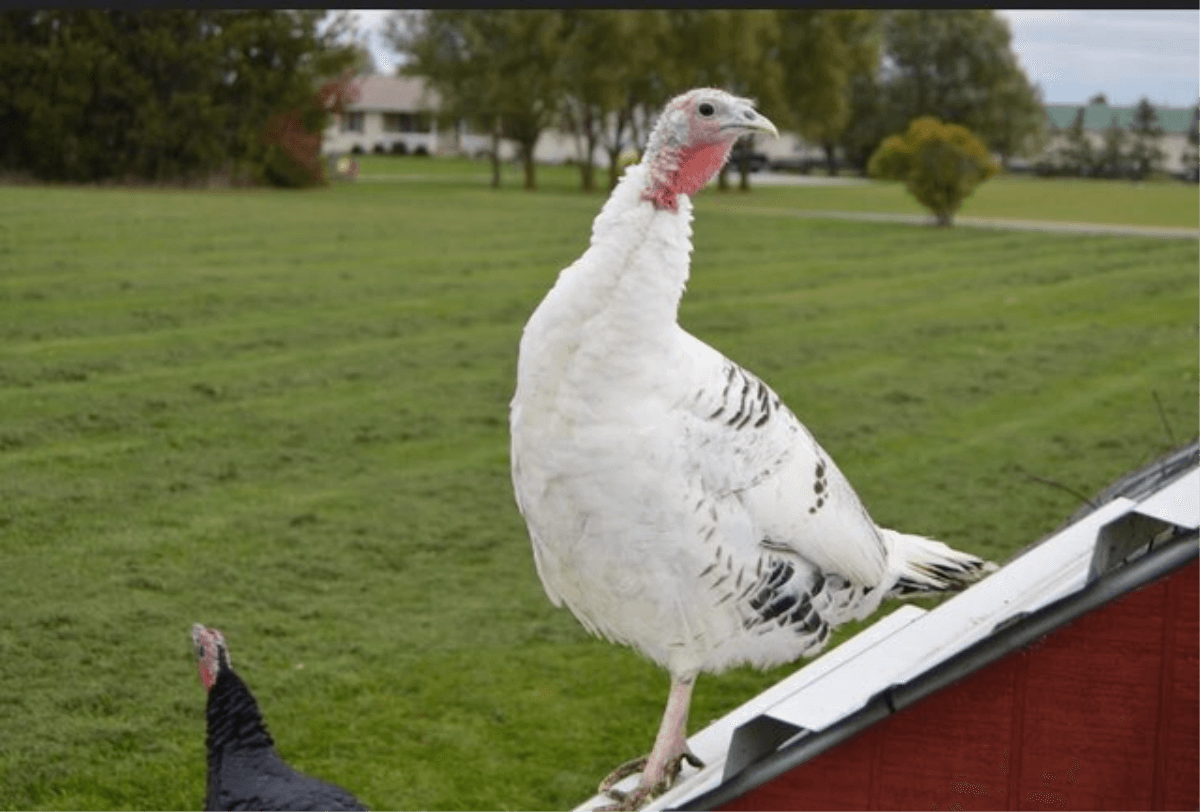 One thing I learned quickly was that the heritage turkeys, unlike the broad breasted turkeys, can fly! So after retrieving our flock of 12 turkeys from the top of our small goat shed I had to make some adjustments.  I found that raising them in the enclosed tractors that we have on our property worked great. Moving them every day to every couple of days allowed them fresh grass and more of a free range living space, with protection.

Sarah also had a great setup.

Our farm is ever changing with tons of birds, so we actually had 3 different set ups for our heritage turkeys. The first setup was using our 10×10 chicken tractor after the brooding stage.  We couldn’t keep them in the tractor for too long, because our next round of cornish cross were arriving, so we had to build a covered outside area in one of our fields. This setup worked great for the summer and fall, but we kept our 3 Chocolate Turkeys for breeding, and needed a fully enclosed area for the colder weather.  We turned a smaller outbuilding into their winter home and to keep them from flying out once again placed a net over their run space. 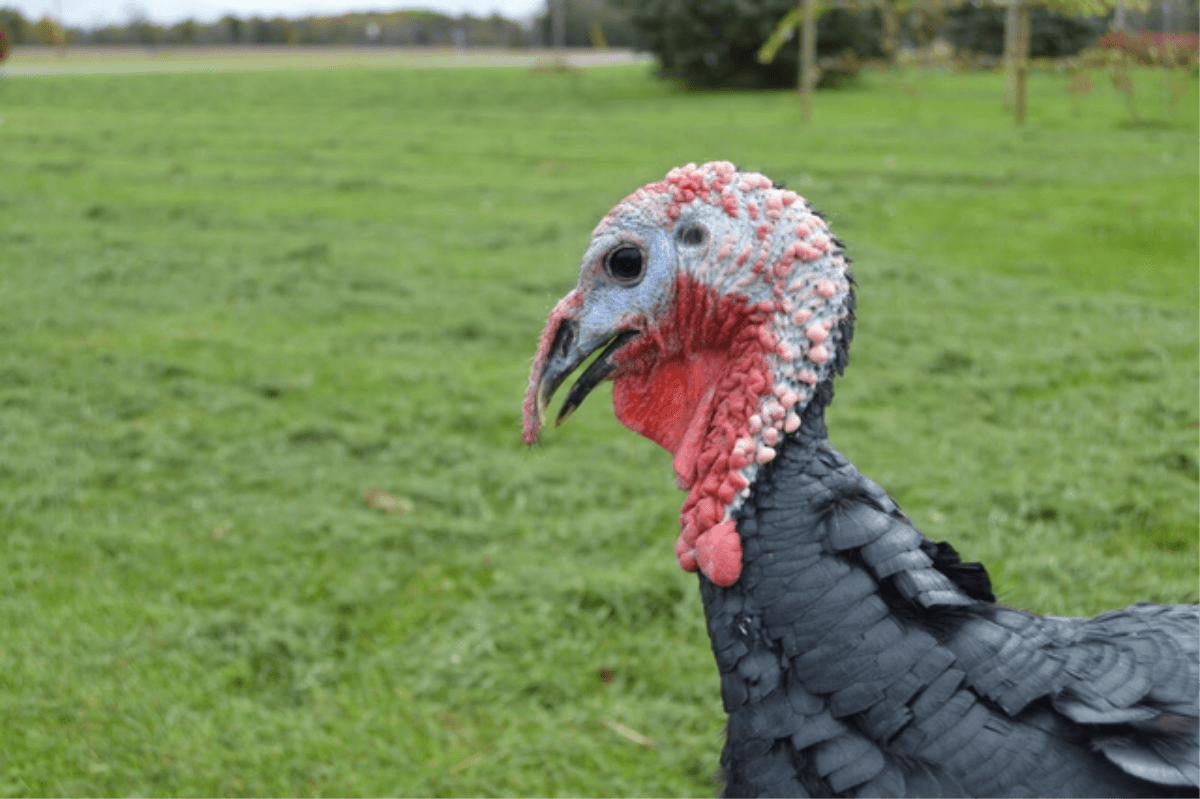 Bourbon Red:  They were my most active and were a bit feisty with the other breeds. At around 12 weeks I ended up having to separate the bourbon reds from the black spanish as the two toms I had started to get a bit too aggressive with each other.

Black Spanish: This breed developed and grew the quickest.  My tom started strutting at only 3 weeks. Aside from the black spanish tom not getting along with the bourbon red tom, this breed was quite mellow and very easy to handle

Midget White: This breed was such a fun breed to have around. They were quite a bit smaller than the other heritage turkey breeds.  They were docile and friendly and extremely easy to handle.

Chocolate: My tom of this breed was the dominate tom of the 4 I had in the group.  Thankfully he only showed dominance when he was let us of the turkey inclosure when taking pictures, and not in the run/tractor/coop when with the other toms. The hens were a little bit more skittish.

Royal Palm: The royal palms were an easy going breed and both the toms and hens were easy to handle. They are a smaller breed that was calm and a great addition to our farm.

Narragansett: This breed was the friendliest of my 12 turkeys.  We had all hens and they were very curious and always wanted to come around us.

Blue Slate: Blue slates were also a favorite in our bunch.  The 2 toms were docile and friendly and the hen was also a curious and calm. Blue Slates would be my breed of choice if I were to order again, based on looks and personality. 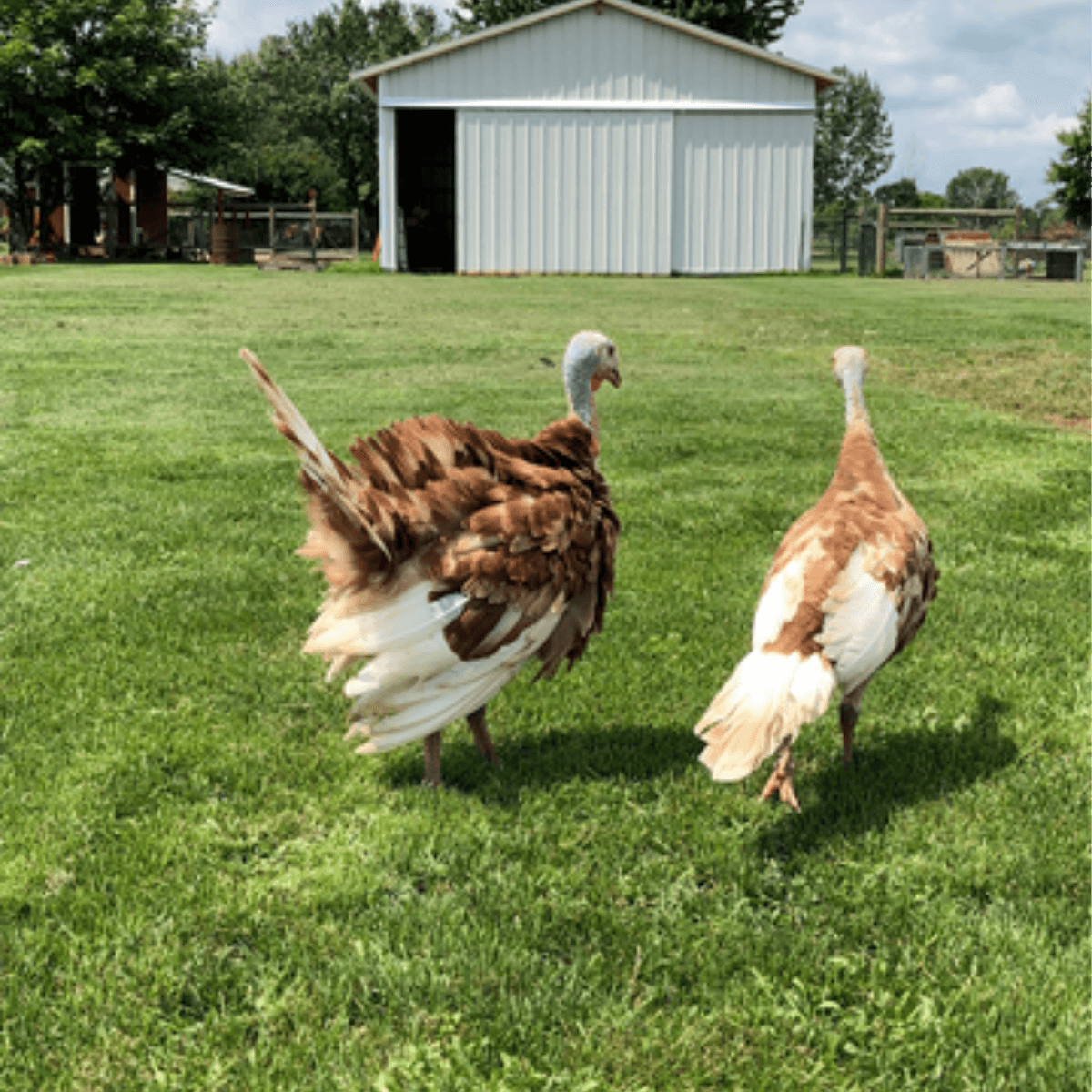 I knew from the start that the heritage breeds would take much longer to get up to processing weight.  We chose to process at 24 weeks and the final dressed weights were:

After my first season with heritage breed turkeys, I am definitely ready to do it again and have already placed my order for 2019.  The heritage were amazing foragers and because of quality feed and proper husbandry tasted incredible. I received a lot of positive feedback from friends and family who we shared our processed turkeys with and are hoping to enjoy another delicious heritage turkey this upcoming Thanksgiving and Christmas.  If you have a bit of patience and space I would highly recommend giving heritage breed turkeys a try! 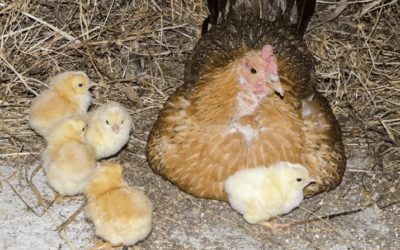 What To Do When You Have A Broody Hen

Broody hens, one of those exciting yet also frustrating aspects of chicken keeping. Learn what to do if one of your hens decides to go broody. 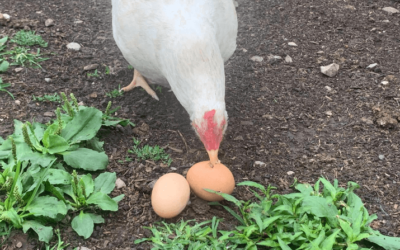 How To Deal With Hens Eating Eggs

Egg eating is a bad habit that sometimes happens in a flock. We have some helpful tips on how to deal with a hen that develops an egg eating habit. 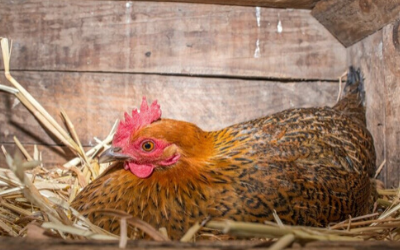 Signs That a Pullet Will Begin Laying Soon

Learn what signs to look for when your pullet (young hen) is ready to begin laying. Around age 16-20 weeks old, a pullet begins laying eggs.