In this coop tour, Jess from the Remote Customer Service Team shows us her summer coop set up, how she deals with the challenges of their location, and how she protects her chickens and ducks from predators.

Jess’s farm is at the highest elevation in her county so she gets very high winds. To make sure her coops are stable in the high winds, she chose low profile prefabricated coop designs and reinforced them with plywood and by gluing the seams in addition to adding bars and posts to the corners to help anchor the coops. Jess has added extra D-rings and latches to the coop doors to make sure raccoons can’t open them with their extra dexterous fingers.

The runs are made with very thick gauge chicken wire, even doubled in some areas, and includes wire buried around the perimeter of the coop. Jess says that letting the grass grow around the perimeter also prevents predators from digging and gives the chickens more things to scratch and peck at.

The run base is a mixture of soil, sand, wood chips, with added diatomaceous earth and a coop refresher product. Jess turns mix every other month and uses the ground cover as compost in the garden the next year.

The summers are very humid so the open runs and windows on the coop help with ventilation to keep the humidity inside the coops low. Jess lives in the snow belt and gets tons of snow in the winter, so she has a winter coop set up in the lean-to of the barn where she has electric hookup.

One of the best ways to prevent predators from coming around your coop is making sure there is no food waste for the predators to scavenge. Jess uses PVC pipe feeders and waterers to reduce wasted food inside the coop. She uses a tray to feed her flock treats and then removes the tray from the coop every night so nothing is left in the coop.

When preventing predators from visiting your coop, it’s helpful to know what predators you are dealing with so you can plan accordingly. Jess has game cameras set on her coops so she can see when and where predators are coming to the coop. Jess found signs of a full grown coyote bothering her chicken coop, scratching at the sides trying to get in, so she set up Nite Guard at a taller height to scare off the coyote. She also had raccoons coming to the coop, likely scavenging food waste, so she set up another Nite Guard at a lower height to scare off raccoons. Jess uses Nite Guard reflective tape strips attached to the corners of the coop to scare off hawks and says it has held up well even in the high winds they get at her far

Jess wants her ducks to live at the pond but currently has them in their own coop near the chickens because of the predators and she says the ducks are scared of the pond. She says she rarely if ever has any signs of predators bothering the ducks, possibly because of their size and they make more noise than the chickens.

To further protect her flock, Jess only lets them out of their secure runs to free range when either she or her husband is home to supervise. The flock is safely locked up in their coop every night.

What kind of challenges do you face for your coop with your location? How do you protect your flock from predators?

Jess shares her experience with using alternative bedding material made from coffee grounds in her chicken coop and brooder. 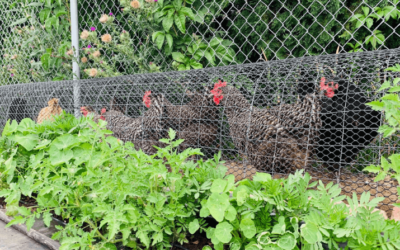 Build A Chicken Tunnel, or “Chunnel”

Guest blogger Julie M shares how she built a chicken tunnel, or chunnel, to keep her chicken flock out of her garden but happily scratching. 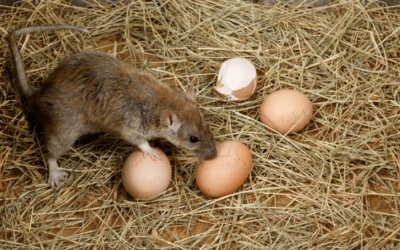 Dealing With Rodents In Your Coop

Rodents in your chicken coop may not seem like an issue, but rats and mice can cause other issues for your flock if left unchecked.